Matt Godin scored the equalizer in stoppage time to secure a deserved 1-1 draw for Coventry with Huddersfield in the Sky Bet Championship.

Danny Ward gave Huddersfield the lead in the 18th minute with a superb first-time finish from Harry Tovolo’s cross.

This looked like he would be the winner as Coventry turned down a number of chances, Callum O’Hare was twice denied by Lee Nichols in the first half and Jimmy Allen hit the post after the break.

But Gooden passed Judy Jones’ cross in the 93rd minute to save a point for the visitors.

The result left both teams out of the play-offs, with Coventry behind sixth-placed Stoke on goal difference and Huddersfield by four points.

How did Coventry pressure finally pay off

If Huddersfield retained the three points, they might have considered themselves lucky after a game played largely in their half.

Coventry’s best chance in the first half was for O’Hare, who saw an effort for a ball comfortably parried by Nichols before shooting the keeper from 10 yards.

Both opportunities came after Huddersfield put up a fine goal, sending Tovolo into the penalty area from the left for a first-time shot by Ward into the bottom corner.

Huddersfield could have made it 2-0 early in the second half when Danny Ward sent Duane Holmes’ shot to the post.

But Coventry kept finding holes and saw Allen hitting the wood with an effort out of the box. Nichols then made a header from Dominic Hyam, who should have scored a few minutes later when he nodded from a corner kick.

Huddersfield had a great opportunity to put a stop to the match when Matty Pearson missed with a header from close range.

The blunder proved costly as Gooden popped his head into Jones’ cross as time ran out.

Man of the Match – Matt Godin

Had Godin not scored a last-gasp equalizer, the man of the match award would certainly have gone to Huddersfield goalkeeper Ward, who made a number of good saves to keep the visitors in trouble.

However, Godden was energetic the entire time and produced the perfect finishing touch to save a point. 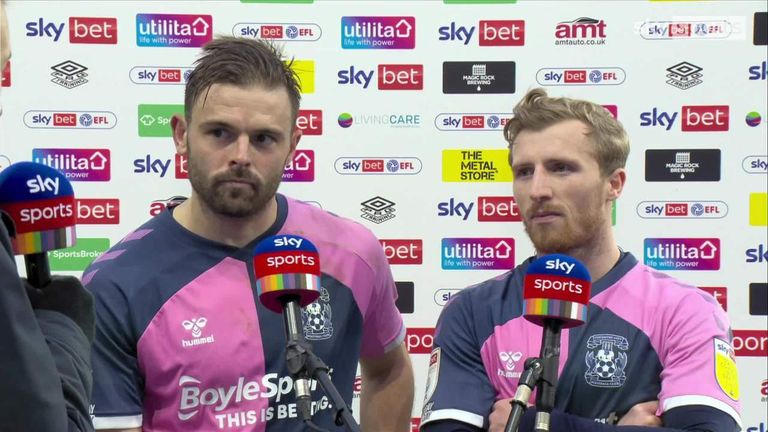 Matt Godin and Man of the Match Jimmy Allen believed the equalizer was a fair result after Coventry returned to score a late equalizer against Huddersfield.